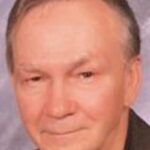 David Christopher Doty of Elba Township, age 76, died Friday December 30, 2022 at Lapeer County Medical Care Facility. Mass of Christian Burial will be celebrated at 4:00 pm Thursday January 12, 2023 at St. John the Evangelist Catholic Church 404 Dayton St. Davison, Fr Andrew A. Czajkowski, Celebrant. Private inurnment at St. John Cemetery will be held at a later date. Family will receive visitors from 3:00 pm until time of services at the church. Those desiring may make contributions in David’s memory to St. John Catholic Church or a Mass in his memory.

David was born in Flint Michigan on November 27, 1946 the son of the late: Carl L. and Evelyn M. (Martindale) Doty and had resided in the Davison-Lapeer area his entire life. He was a graduate of Davison High School Class of 1965, and proudly served in the US Army during the Vietnam War. He was joined in marriage to Louise Brunsman on October 25, 1969, and in 2019 they spent their fifty year anniversary in Hawaii.  David loved to travel and camp, but his greatest love was spending time on his motorcycle with the wind at his back riding from sundown to sun up. He was an avid outdoorsman who loved to hunt and fish.  He was a member of St. John the Evangelist Catholic Church, Davison, and had been employed by General Motors; Chevrolet Manufacturing and AC-Delphi until his retirement with thirty years of service.

He will be missed by all that knew him. The family would like to extend a sincere thank you to the staff at Lapeer County Medical Care and Heart to Heart Hospice for their help and compassion during this time.  Please share your condolences at www.hansenfuneralhome.net