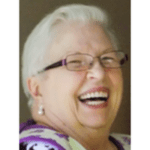 Dolores A. “DoDee” Klocko of Davison, age 91, went home to be with the Lord on Thursday, December 22, 2022. Honoring her wishes, cremation has taken place.  A Memorial Mass will be celebrated at 12:00 noon Saturday, January 14, 2023 at St. John the Evangelist Catholic Church, 404 Dayton St. Davison, Fr. Andrew A. Czajkowski, Celebrant. A luncheon will be provided immediately following the Memorial Mass at Copper Ridge Golf Course 8475 E, Atherton Rd. Davison, MI 48423. Private inurnment will be held at Great Lakes National Cemetery in Holly, MI. where she will rejoin her “one and only love”.  The family will receive visitors one hour prior to services at the church. Those desiring may make contributions in DoDee’s memory to: Operation Injured Soldiers, 22645 Pontiac Trail, South Lyon, MI 48178

DoDee was born in Hubbard, Ohio on December 12, 1931, the daughter of the late Alex and Helen (Menhart) Kibash and has resided in Davison since 1999, spending most of her life in Flint.  She was a graduate of Flint Northern High School, Class of 1950. She was joined in marriage to her “one and only love” Henry “Hank” Klocko on January 24, 1953 at Sacred Heart Catholic Church in Flint and he preceded her in death on Feb. 3, 2007. Upon their retirement in 1979, they began their passion of traveling in a fifth wheel while enjoying the United States for several years. She was a member of St. John the Evangelist Catholic Church, Davison and had been a active volunteer at St. John Welcome Center and gift store.