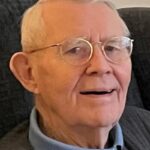 BAKER, Harry P. – of Flint, MI, age 91, passed away on Thursday, December 8, 2022 at his home. A Mass of Christian Burial will be held 3PM Thursday, December 15, 2022, at St. John the Evangelist Catholic Church, 404 N. Dayton St., Davison, MI 48423; Rev. Fr. Andrew A. Czajkowski celebrant. Interment will take place following the service in St. John Catholic Cemetery. The family will receive visitors the hour prior to the Mass at the church. In lieu of flowers, memorial contributions may be made to St. John Catholic Church or Outreach East.

Harry was born in Flint, MI on August 7, 1931, son of the late Hermon J. (Dora L. (Edwards) Baker). He attended St. Matthew Catholic School in Flint, MI and went on to graduate from the University of Notre Dame. Harry joined the Congregation of Holy Cross and was ordained a Catholic priest in Rome, Italy. He taught at Notre Dame and was transferred to Texas. After many years with the Holy Cross Order, and with the permission of the Holy Father, Harry was laicized.

Harry began the study of Psychology at University of Texas, Austin where he met and married Valerie Gilbert. After he attained his PhD., he continued his career path in forensic psychology in the Dallas / Ft. Worth are for approximately 35 years.

Following Valerie’s death in 2003, Harry returned to Flint. He later married his longtime classmate at St Mathew Catholic School in Flint, Marlene Rabidoux and started his practice in the Flint area, retiring in 2011. He was a member of the Fatima Blue Army Prayer Group at St. John the Evangelist Catholic Church and enjoyed many members of his church family. Harry enjoyed listening to and helping those in need. He remained faithful to his religious beliefs and dearly loved his family. Harry was a kind and gentle man and was loved by all.