The earliest historical records indicate that in 1860 a few Catholic (mainly German-speaking) families from New York State settled in the southern part of Richfield Township, twelve miles from the nearest church of their faith. Because poor roads made it impossible for them to attend Mass regularly, a German-speaking priest from St. Michael Parish, Flint, would come out occasionally to celebrate Mass in the homes of George Walker and A. B. Conrad.

In 1871, although there were only nine Catholic families in the area, a frame church building, only 20 by 40 feet, was erected in the southeast corner of section 27 in Richfield Township, at the intersection of Richfield and Oak Roads, the present site of St. John Parish Cemetery. In the absence of a full-time pastor, Mass was celebrated in the first church building only three or four times a year, but the laymen of the parish conducted regular Sunday services.

In 1893, Father Francis C. Kelley, only twenty-four years of age, was appointed pastor of the Catholic parish in Lapeer. He began almost immediately to better the condition of the Richfield Mission, as it was then known. On August 21 of the following year, the first Mass was celebrated in a new stone church which had been built on Genesee Street in the City of Davison at a cost of $4,974.74.

Recounting the early history of the parish in an issue commemorating the Golden Anniversary of the “enterprising Village of Davison” (October 21, 1938), the Davison Index noted that “the collection of funds was in itself a task as the small congregation could not hope to gather sufficient funds for the building of a new church. They had to depend on their good neighbors of Richfield, Flint and Lapeer. On the list of subscribers of course are found the names of all members of the parish at that time, but it is interesting to find many names of friends not members of the parish. Among the long list we find A.B. Harvey, W. H. Foote, W. H. Howe, S. Billings, Geo. Taylor, David Richards, E. D. Black, L. Gifford, Elder Briant, A.E. Hurd, R. W. Ashley, James Baxter, C. A. Uptegraff, D. Armstrong, J. M. Schweitzer, P. Goodenough, L. Skellenger, W. J. Goodenough, M. J. Eastwood, Henry Dayton, G. Hubbard, Phil. Hill and others.” Stone for the new building had been gathered from the fields and hauled to the building site by members of the congregation.

Originally named St. Joseph Church, then the Church of St. John the Divine, the parish was finally renamed St. John the Evangelist. This occurred at the dedication of the stone church building by the Bishop of Detroit, the Right Reverend John S. Foley, on October 7, 1893. 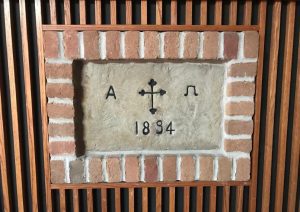 Father Kelley, later the Bishop of Oklahoma City and Tulsa, continued to serve the church of Davison as a mission from Lapeer, until his departure for Chicago in 1907 to found the Catholic Church Extension Society as a means of assisting similar “mission parishes” throughout the country. Father Patrick R. Dunigan succeeded Father Kelley as pastor of both parishes (Lapeer and Davison) until 1916, when he became an Army chaplain. He was followed by Father John Palmer, who served until 1923, when Father Thomas Carey, together with several recently ordained assistants, was appointed to the area. They immediately began to canvass the area for other Catholic settlers, and it was through their efforts in Davison that the “mission parish” grew from 21 families in 1923 to 97 families in 1928.

In that year Bishop Michael J. Gallagher of Detroit established St. John as a parish in its own right, with Father Henry Mayotte as the first pastor. In addition to his responsibility for the Davison parish, Father Mayotte also celebrated Mass each week at the Lapeer State Home and Training School. St. John continued to experience substantial growth during his ten-year pastorate, so that by 1938, when Father Lewis Dion became the second pastor, the membership had increased to 170 families. Father Maurice Olk succeeded Fr. Dion in 1942, and in 1944, Father Earl V. Sheridan became pastor.

By this time the parish had grown to 278 families, and the small brick church was becoming inadequate. Father Sheridan saw the need for a parish school, so at his invitation four Sisters of St. Joseph from Nazareth, Michigan came in 1946 to occupy the brick convent next to the church. The school itself occupied a former CCC barracks building which had been moved by parish members in three sections from its original location on Dort Highway in Flint, then reassembled upon its arrival in Davison. When opened, 175 students filled its four classrooms.

When Father Sheridan was named pastor of St. Michael Parish, Flint, in 1950, Father Hayes was named administrator until Father Edward Donahoe was appointed pastor later that year. Father Donahoe recognized the need for a larger church and a conveniently located residence for the parish priests. Almost immediately, he began to oversee construction of a new church and rectory. The first Mass was celebrated in the new church at 404 North Dayton Street on June 8, 1952; and on September 14 of that year Bishop Joseph Albers solemnly blessed the building. The “old church” was then used as the parish hall.

However, the need for a new school was becoming apparent, so in 1956 the former church building was razed and a new school was built on its site. The old school was remodeled and became Judge Mac Hall, in honor of Judge Frank McAvinchey, a longtime parishioner.

Later pastors included Father Bernard Behan (1960-67), Father William Flick (1967-71), Father John Shinner (1971-72), Father Edwin Schoettle (1972-77), and Father Joseph Aubin (1977-83). During their respective terms parish membership continued to grow. During this time also, the parish began to experience many changes resulting from the renewal brought about by the Second Vatican Council. In the spring of 1968 the first Parish School Board came into being, and later that year, the first Pastoral Council. When the school was closed in 1970 because of declining enrollment, the Parish Religious Education Program (P.R.E.P.) was expanded and to this day continues to flourish as one of the largest religious education programs in the diocese.

In 1983 Father Andrew Czajkowski, the present pastor, returned to the parish he had served as deacon ten years earlier. The following year three permanent deacons — Neil Huiskens, Robert Poulson and Claude Spencer — were ordained by Bishop Kenneth J. Povish for service in the parish. More recently, a fourth permanent deacon, Daniel Fairweather, was ordained in 1995.

By the late eighties, with continuing growth under Father Andrew’s leadership, parish members generously and enthusiastically supported a “Faith in the Future” program. As a result, on June 11, 1989, groundbreaking ceremonies were held for construction of a new parish activity center. Less than a year later, on March 10, 1990, Bishop Povish dedicated the new St. John Parish Hall and expanded parking facilities.

On May 23, 1993, a new church seating 886 persons with an adjacent chapel was dedicated by Bishop Povish. The new church facility cost $4.2 million and continues to reflect the many sacrifices and devotion of the people and staff of St. John the Evangelist Parish.

In April 1998, the final mortgage payment on the church was made to the Diocese of Lansing, 55 months ahead of schedule, thereby saving the parish $197,094.00 in interest. Monies were accrued from the parishioners’ monthly contributions, donations from the Altar Society, the 50 & Over Club, and from numerous fun(d) raising projects, including the Annual Festival of Flags and Bingo.

In 1999, plans were announced for an All Parish Family Center. The 55,000 foot multi-purpose facility was designed to include classrooms, offices, youth room and reflection room, large activity room and gymnasium, locker rooms, small activity, wellness area, library, elevated indoor walking track, kitchen and storage areas. The building has been well received by parish members of all ages, as well as neighbors and visitors from the community.

St. John Parish has also entered into partnership with McLaren Regional Medical Center; Wellness and Therapy services and wellness classes are made available to parish members and members of the community. In addition to providing much needed space for education programs and parish services, the Center has hosted music concerts, seminars, workshops, retreats, dances, wedding receptions, family gatherings, and regional and diocesan gatherings. It is also referred to as the 505 Building.

The parish vigorously participates in Christian Service, Outreach East, North End Soup Kitchen, United Lenten Appeal, Alcoholics Anonymous, as well as many appeals that serve the low-income and in-need community. The former parish school building is now the Community Services Building or 425 Building and provides donated space for these programs and services.

At present, St. John is served by one pastor, one parochial vicar, one woman religious, one permanent deacon and a combination of 34 full-time and part time employees. The parish and its programs and services continue to be supported by a tremendous corps of persons who generously share their time, talent and resources.

The site of the first church in 1871 continues to serve as our parish cemetery and memorial gardens. With the additional purchase of property north of the original site on Oak Road, the cemetery is now a total of 28.1 acres. On Sunday, October 29, 2006, St. John Chapel – Mausoleum was dedicated by Bishp Mengeling. The Chapel is used for committal services during inclement weather. The Mausoleum privides indoor crypts for burial and niches for cremated remains.